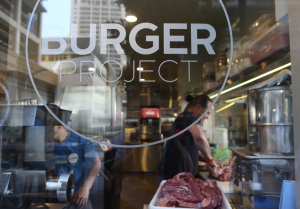 He’s best known for fine-dining, and some of the country’s best: Rockpool, Spice Temple and Rockpool Bar & Grill. The enterprising chef also has his hand in the inflight dining game.

The launch of Neil Perry’s newest project, aptly named Burger Project, will see the chef and restaurateur branch out even further.

He wouldn’t be the first high-end chef tapping into the fast food market, or burgers. Warren Turnbull ditched his two-hatted Assiette for a now-thriving Chur Burger chain.

Abroad, San Francisco’s acclaimed chef Daniel Patterson of Coi has teamed up with food truck king Roy Choi to bring Loco’l to the US masses early next year.

What these high-end chefs have in common beyond take-away fare is the quality of ingredients used. They ‘re standard in restaurants, but rarely found in fast food.

“We’re using whole 36-month Cape Grim grass-fed chuck and brisket steak, and grinding it in-house to make the patties,” says Perry of the beef on the menu at Burger Project.

Of the produce generally: “Provenance is of utmost importance to us at Burger Project and we care intensely about sustainability, where each ingredient comes from and the necessity to treat the earth well in order for future generations.” 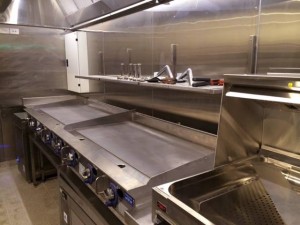 Under Construction – soon ready to cook up those first juicy burgers!

It’s an approach that Perry has passionately embraced over the years and defines each venue within the Rockpool Group, jointly owned with Trish Richards and David Doyle, who are also behind this latest endeavour.

So why burgers over, say, fried chicken, another fast food-goes-fancy poster child?

“We wanted to take one of the world’s great gourmet burgers from Rockpool Bar & Grill to the people… and so Burger Project was born,” explains Perry.

A version of the original will grace the menu, along with a chicken burger, ‘Spicy pork belly’, ‘Magic Mushrooms’ and even ‘The Korean’ burger with beef and kimchi. There will also be various hot dogs, hot chicken wings and ice-creams with several Aussie inspired flavours, such as lamington, pavlova and rocky road.

The casual eat-in meets takeaway space in Sydney’s World Square was conceived by architect Grant Cheyne, who is behind a number of the Rockpool Group’s venues, and sits 100 hungry Sydneysiders inside and out.

In what seems like a smart strategic move, Burger Project has also taken up prime position next to Din Tai Fung, which attracts hoards for its quality-driven dumplings midweek and weekends.

No doubt, queues are long for Perry’s ‘people’s burgers’ now too.